I know that the right-left political spectrum is slippery. Most people consider it dead and buried. End of history, post-ideological world, and whatnot.

I know that when a politician tells you “we are neither right nor left, just #populist” it gets even more confusing .

I know the face people make when I say that (on the cultural dimension and therefore by synecdoche) the 5 Star Movement is a right-wing party.

From a manifesto of the Front National: “Neither right nor left”

I know that on certain socio-economic issues they might even look like a left-wing movement (environment protection, free Internet, clean transportation system).

But also the Front National (FN) is right-wing on the cultural dimension and rather left on the socio-economic one (see the study from the Friedrich-Ebert-Stiftung, figure below). However, according to 100% of political scientists in this world, FN is a right-wing party (if you have read anywhere that FN is a left-wing party, please let me know).

Well, apparently when it comes to the party of Beppe Grillo, rules change. Since the 5SM is for public water, against incinerators, and implements tools for direct democracy (whatever that is supposed to mean), well, nobody dares labelling them as right-wing.

Now, let’s pretend I did not tell you that we were talking about the Five Star Movement. I list a couple of things about *a certain political party* and then you tell me whether it looks like a right-wing party or not (each link in red brings you to a relevant article on the topic, from national and international newspapers and magazines).

1) Their political ally in the European Parliament is Nigel Farage, leader of the xenophobic UKIP. Together they created the group Europe for Freedom and Direct Democracy (EFDD). In several occasions they defended Nigel claiming he is not racist (and for the standards of the group it might even be true). They repeatedly said that – although they don’t completely agree on every issue with Nigel – after all they agree on a very long list of relevant issues (including a strong Euroscepticism and a possible exit from single currency).

2) Their political line about migrants has been described (by a moderate national newspaper) as undistinguishable from the one proposed by Matteo Salvini, leader of the xenophobic Lega Nord. Indeed, they want to close down places for refugees. Moreover, they spread fake news about migrants (among others, did you know they bring Ebola to Europe?) and about the NGOs trying to save migrants (did you know they are becoming filthy rich?). In short, they publicly, repeatedly, and consistently, took anti-immigrants positions, and some think they might create an unholy alliance with Lega Nord after the elections.

3) When the parliament tries to adopt a law that punishes those who defend fascism, they find the law “a freedom killer” (wasn’t Fascism a freedom killer?). Only the far right and Berlusconi oppose this law, together with *a certain political party*. When the leader of a fascist movement (Casa Pound, the self-defined “fascists of the third millennium”) asked them to take position about fascism, the leader of *a certain political party* replied: “This question doesn’t concern me. 5SM is an ecumenical movement.” But taking a position about fascism is not that difficult after all. In fact, a member of a *certain political party* (elected in the parliament!) said: “before it degenerated, fascism had a sense of national community (which it took directly from socialism), the highest respect for the state and a will to protect the [institution of] family.” Eventually several international newspapers and magazines started suspecting that, after all, they are a conservative party and their leader might be the new Mussolini.

5) When the parliament debates about the possibility to adopt the ius solis principle (which grants citizenship rights to children born on Italian soil from immigrant parents), *a certain political party* declares it will vote against the bill because it would “give a political boost to those still feeding off ideologies.” What a surprise that the same political party “has been accused of courting right-wing votes with a turn against migrants and Roma.”

Now. How does this *certain political party* look like to you?

The same 5SM that shares a group in the European Parliament not only with UKIP, but also with the Swedish Democrats (which are trying to break their links with Fascism), with the party of Janusz Korwin-Mikke (see here what he thinks of women), and also with the far right and xenophobic Alternative for Germany.

If Nigel Farage is your political ally, if you don’t mind belonging to a group which includes far right/former fascist/radical right politicians, if your position about migrants is almost identical to the one expressed by Matteo Salvini, if you endorse Donald Trump and Vladimir Putin, if your party lacks transparency and internal democracy, if you refuse to condemn fascism, if you are against the workers’ unions…the least one can say, is that you are right-wing and potentially anti-democratic.

One might reply: “but what about the party’s position on socio-economic issues?”

I might say: “please, read the fascist manifesto of 1919 and see what it says about socio-economic issues”:

So, now: when there will be new elections in Italy (only Zeus knows when), and you will be tempted to put the Five Star Movement in the left-wing populist cauldron together with SYRYZA, Podemos, Bernie Sanders, or Jeremy Corbyn…please don’t, just don’t do it.

Addendum August 2017: Breitbart (!) recently celebrated the fact that “Italy’s anti-mass migration, Eurosceptic Five Star Movement (M5S) is now the most popular party in the country according to three consecutive opinion polls this week.”

Addendum September 2017: “Virginia Raggi, mayor of Rome, has declared war on the movement for housing rights. […] This way of reacting, more right-wing and inhumane than the new immigration laws of the Minniti Decree, more populist than Matteo Salvini, has done nothing except increase the tension in Rome, generating in turn interventions from law enforcement agencies which serve to remove the question rather than resolve it.”

Well, this has nothing to do with being left or right, because we know that conspiracy theories have no color, they just go hand in glove with the populist worldview: Interview #16 with Levi Littvay: Conspiracies, Fake News and Populism

However, it is particularly irresponsible for a political party that has the support of a quarter of the vote share, to spread fake news about alleged correlations between vaccinations and autism. When critical thinking trespasses the limits of paranoia, it is never a good sign. 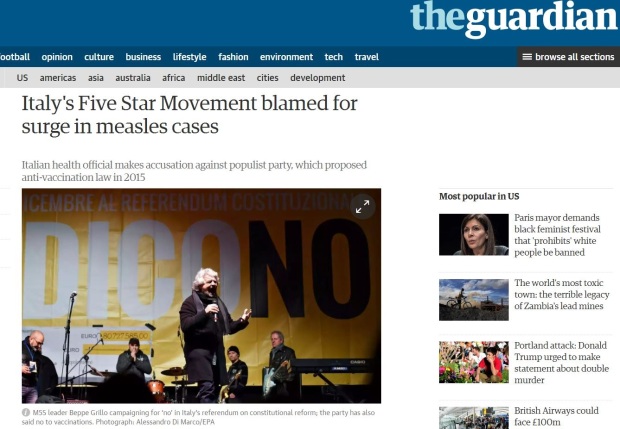 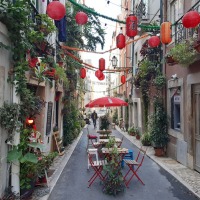