This article, written by Byeongsun Ahn, PhD Student at the Department of Sociology of the University of Vienna, focuses on a paradoxical element of contemporary populism: the distinction between “good” and “bad” migrants. In particular, Byeongsun Ahn exposes the Austrian case, and explains why FPÖ politicians now make frequent appearances in Serbian restaurants and nightclubs, where they pose in front of Ćevapčići and dance Turbo-Folk. This is the first half of Ahn’s reportage.

Johann Gudenus on the left, Heinz-Christian Strache on the right.

FPÖ welcomes any migrant who wishes to come to Austria, who are willing to integrate and to appreciate Austrian culture. Here, Serbians, an important segment of Austrian migration culture, who have all become ‘standard Austrian’, learned German and brought significant contribution to culture, economy and agriculture, are an example of well-integrated migrants…the opposite of those who, unfortunately, didn’t manage to do so.

Vienna, State Elections, October 2015. Just like in many other European countries, the majority of the campaign revolved around the ‘biggest refugee crisis since World War II’. Muslim migrants have been at the center of the fervent debates about immigration and integration. This is not new to Vienna – or to any other major European cities since 2000s – where campaign posters with the two words, immigration and integration, are plastered in every corner of the street during election times. What came out of this election was a mere surprise. The Freedom Party of Austria, FPÖ[2], a textbook example of European right-wing populism, came in second with overall 31 percent of votes, while ‘held off’ by Michael Häupel (Social Democrats), who’s been in office since 1994.

But there is one thing that makes contemporary right-wing politics in Vienna more special than that of elsewhere; the FPÖ is in love with Serbian migrants.

Surely the rhetoric of good and bad foreigners in right-wing politics is not specific to FPÖ. In the mounting Islamophobia of today’s political reality, the Islamist threat narrative has been used by many other right-wing parties in Europe (see POP’s interview to Ruth Wodak). However, much of the previous anti-foreigner rhetoric has been toned down in recent election campaigns; e.g. Marie Le Pen’s “Xenophobia is the hatred of foreigners. I don’t hate anyone”. 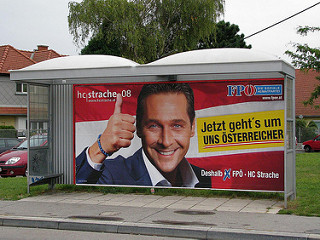 What’s specific to FPÖ, however, is that they started looking for votes, not just any votes, but from migrants. From Serbian migrants, to be more precise. Seeing Heinz Christian Strache – the Chairman of FPÖ – with a Serbian orthodox prayer rope is no more a newsworthy story in Vienna. FPÖ politicians, including Strache himself, make frequent appearances in Serbian restaurants and nightclubs, where they pose in front of Ćevapčići[4] and dance Turbo-Folk[5]. In a popular Austrian satirical talk show in 2010, ‘Wir Sind Kaiser’, Strache said: “I don’t understand where this hate comes from (…). I’m a warm person and I don’t hate. When someone greats me in Serbian, Pomozi Bog, I respond with three fingers. I am multi-cultural”. Strache’s reference to his multi-culturalism continue, as the dialogue follows: 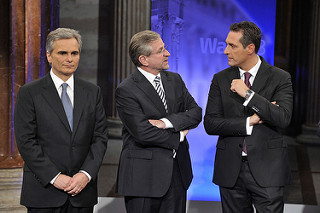 Strache, on the right

Host: We speak a bit of Serbian, right? Do you also speak Serbian?

Strache: A couple sentences, I can say…Kosovo je srce Srbij[6], for example.

Host: But there are many people with a totally different opinion.

Strache: Yeah, you are right.

Host: What does yours mean?

Strache: Where there is injustice, I’m there for anyone who is up against it…and Kosovo is the heart of Serbia. 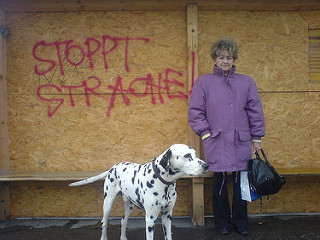 Strache and FPÖ’s love for Serbia extends to Serbian migrants in Vienna and Austria, and this has been constant from 2010 onwards. FPÖ’s search for Serbian migrants has become a general theme of their campaigning. In a video published online before the 2015 election, Strache stated: “The Serbs are the largest migrant group in Austria. They are excellently integrated. They are hard-working people. They value their new home and they stand for their new home, Austria”. An anti-immigration party longing for migrant votes might sound contradictory to many, but this ‘search’ is an extension of the rhetoric of good and bad foreigners, where FPÖ consolidate its discourse-schema that circles around Islamophobia.

[1] After FPÖ won 34 out of 100 seats in the city parliament in 2015, Gudenus became de jury deputy mayor, albeit no real responsibilities.

[3] A Serbian greeting, roughly translates as ‘(may) God greet you’.

[4] Skinless sausage traditional to the Balkans.

Byeongsun Ahn is a PhD student at the department of sociology at University of Vienna.
His dissertation project “Searching for In-between: Identity-Work and Inter-Diasporic Conflict of Serbian Migrants in Vienna” explores the identity negotiation of Serbian migrants in Vienna, Austria and their relations with other diasporic communities in today’s technological, economic and political realities.
His main research interests focuses on diasporic-identities and inter-diasporic relations, as well as the influence of “home-land” politics in the host societies.

3 thoughts on “Re-Branding Right-Wing Politics: The Freedom Party of Austria and their Serbian Migrant Supporters” 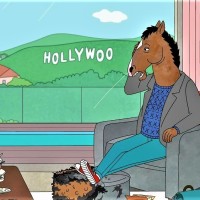