In this article, Anna Gwiazda explains how Jarosław Kaczyński, leader of the Law and Justice (PiS) party, is using LBTQ+ people in general, and transgender people in particular, to create divisions from which to gain politically. She explains how Kaczyński is following the steps of another populist radical right leader such as Orbán, who demonized sexual and gender minorities in Hungary to mobilize his voters and divide the opposition.

Under the conservative flag of ‘nation, family, tradition’, and using a populist discourse to portray the LGBTQ+ community as an internal enemy, it is possible to propose and implement abortion bans, fight feminism or the so-called ‘gender ideology’ (just another name for anything that does not fit the conservative, traditional, and Catholic idea of family and gender roles).

Showing what rising illiberalism and democratic backsliding can do to women and LGBTQ+ people, Anna Gwiazda presents her work on these topics and confronts us with a dramatic situation but also suggests that this is not necessarily good news for PiS on the long run. Will the Polish citizens follow the party or prefer different, less conservative options at the 2023 elections? Will PiS find itself isolated on its own side of the cultural divide that it decided to erect?

Even though parliamentary elections are scheduled for 2023 in Poland, it is obvious that Jarosław Kaczyński – leader of the ruling right-wing populist Law and Justice (PiS) party, started the electoral campaign on 25 June 2022. In his party convention speech, he criticized transgender persons and reproduced attacks on LGBTQ+ people in general, which he had already done before the 2019 elections. Creating divisions to gain politically is a standard tool used by populists, not only in Poland but in other countries too. In Hungary, before the 2022 elections, Prime Minister Orbán demonized sexual and gender minorities to mobilize his voters and divide the opposition. Kaczyński will do the same. Simultaneously, he praises the PiS government for implementing a generous child-benefit system for families and supports an abortion ban, responding to the Catholic Church’s demands. In this short article, I will demonstrate how Polish populists use the cultural us-versus-them divide and anti-gender claims to promote their socially conservative and illiberal vision of society.

Law and Justice is a right-wing populist party which emphasizes the role of the nation, family and tradition influenced by Catholicism, combined with a populist discourse that divides society into two antagonistic groups: the people who are ‘true’ Poles and the Poles who belong to ‘the worst sort.’ The people, who are referred to as ‘the nation’ or ‘the sovereign,’ support traditional Polish values and come from local, small-town or rural communities, and claim to exhibit morality, religious devotion and patriotism. Conversely, for PiS the outgroup consists of anti-PiS parties, communists, former Prime Minister Tusk, Russia, Germany, immigrants, and lesbian, gay, bisexual and transgender people. In fact, the outgroup is often associated with the promotion of the so-called ‘gender ideology’ and is treated as enemies. 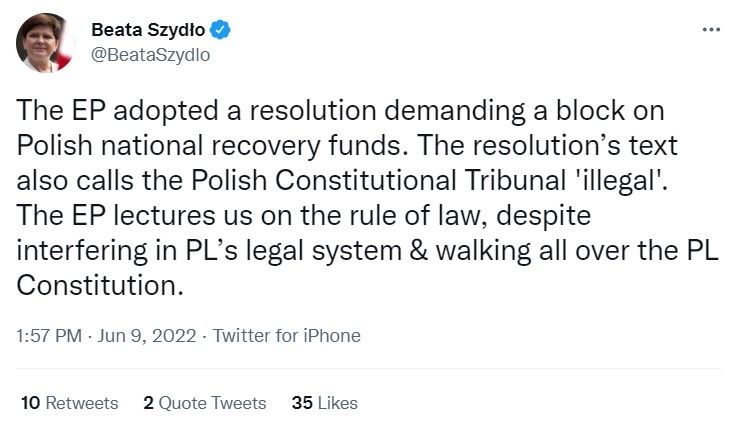 This anti-gender rhetoric aims to preserve the Polish cultural values rooted in Catholicism and to protect the traditional model of the Polish family which is threatened, according to PiS, by the ‘corrupt West’, the liberal European Union, the ‘homosexual lobby’ and radical feminists. Anti-gender claims refer to anti-feminist and anti-LGBTQ+ claims: the former opposes aspects of feminism while the latter questions the existence of gender and sexual identities. These claims are also used to highlight a socially conservative vision of society. PiS mostly makes gendered claims that advocate the preservation of traditional family, values and gender roles. It supports the traditional family where ‘family’ is defined as ‘a lasting relationship between a woman and a man’. Its stance on moral issues is highly influenced by the Catholic Church’s teachings. For more details about this issue, read ‘Right-wing populism and feminist politics: The case of Law and Justice in Poland.’

Drawing on social conservatism, PiS views women as mothers and reckons that the state should guarantee the protection of pregnant women and mothers. In an interview with a weekly Catholic news magazine, former female Prime Minister Beata Szydło (now Member of the European Parliament and Vice-Chairman of the European Conservatives and Reformists Group) argued that the PiS government was pro-women because it introduced pro-family solutions, such as the Family 500+ programme which supported women financially.

However, a different view is expressed by feminists. By providing generous child benefits, PiS encouraged many women to stay at home, potentially having negative consequences for female employment, pensions, the gender pay gap and reinforcing the stereotypical image of women as mothers. Policies that promote mothers’ employment and offer public childcare services advance gender equality more than policies promoting traditional families and paying women to stay at home to care for their children. Thus, this ‘women’s policy’ is questioned from a feminist perspective as shown in ‘Analysing the “what” and “when” of women’s substantive representation: the role of right-wing populist party ideology‘. 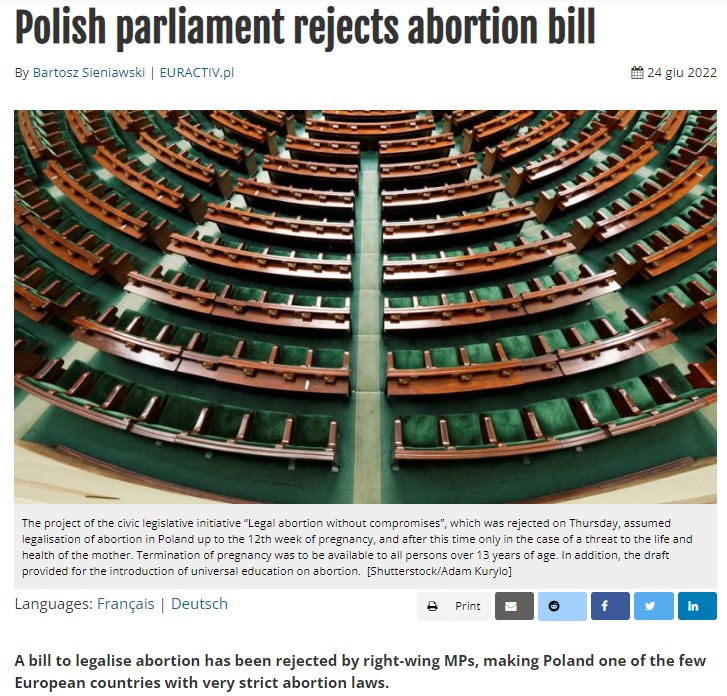 There is no denying that Law and Justice reconfirmed its anti-feminist agenda by supporting the decision by the politicized Constitutional Court to impose a near total-ban on abortion in Poland. This limitation of women’s reproductive rights is additional evidence confirming rising illiberalism and democratic backsliding in Poland which began in 2015 when the PiS party won elections. PiS had already withdrew funding for in-vitro fertilization, restricted access to emergency contraception and reduced funding for combating domestic violence. There is no doubt that Kaczyński wanted to unite his party behind the ultra-conservative proposal to ban abortion and mobilize religious and conservative PiS supporters. However, at the same time opinion polls demonstrated that this decision contributed to the drop in support for PiS by ten percentage points and the party never regained the 40% mark of support in the polls. One could argue that this section of PiS electorate, which was disillusioned with the party in the aftermath of the decision, was less conservative and opposed religious interferences in political and private lives.

Overall, the populist Law and Justice party constructs the cultural divide to mobilize its religious and conservative supporters against the opposition – those who support progressive and liberal values. Its illiberalism entails the limitation of rights, specifically, the rights of women and LGBTQ+ people. There is no doubt that cultural issues will be evoked by PiS in the electoral campaign, to overshadow the cost of living crisis and other urgent matters. It remains to be seen whether this political strategy will pay off in the 2023 elections. 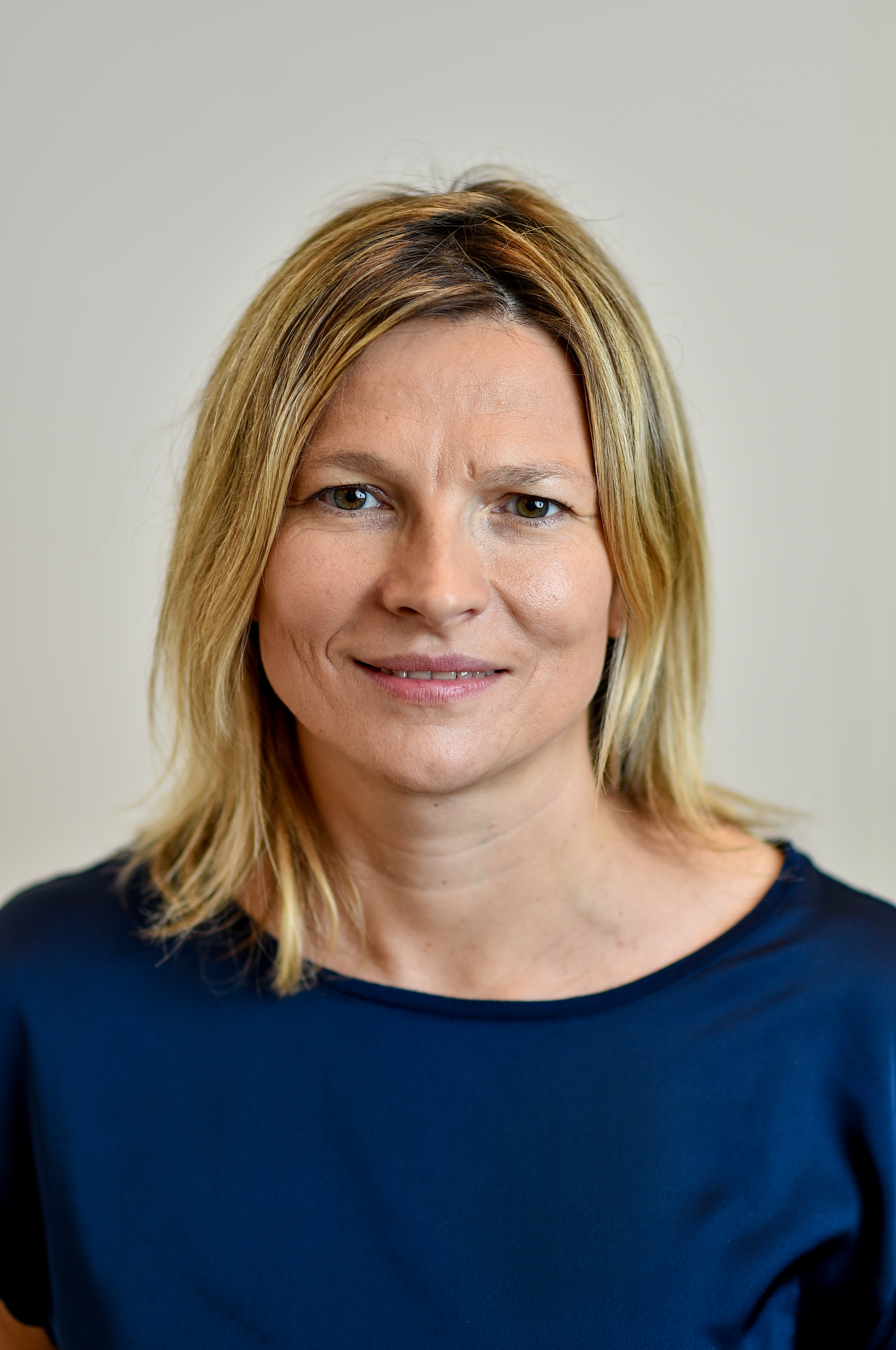 Dr Anna Gwiazda is Reader in Comparative Politics in the Department of Political Economy, King’s College London. Her current research focuses on women’s political representation and gender equality, and she has published extensively in this field, including two special issues: ‘Politics and Gender in Eastern Europe’ in Politics & Gender in 2019 and ‘Women’s Political Representation in Central and Eastern Europe’ in East European Politics in 2021. 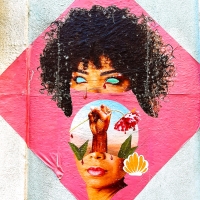 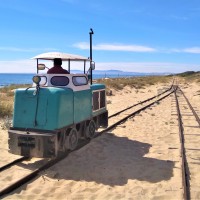 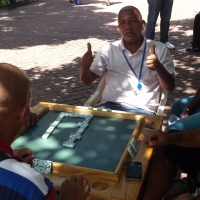 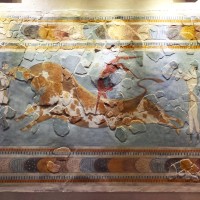