POP proposes its third double interview. In case you missed them, the first two discussed populism in Latin America and the relevance of the Dutch case. This time Daniel Bischof and Roman Senninger present their recently published paper on the link between populism and a simple language.

It is time to take care of OUR people, to rebuild OUR NATION, and to fight for OUR GREAT AMERICAN WORKERS! #TaxReform #USA🇺🇸 pic.twitter.com/LsZvHg3got

POP) Political actors need to communicate in a clear and understandable manner. This is particularly true for populist actors, who claim to be on the side of the man of the street thus embodying the popular will. Simplicity, for populists, is a matter of credibility and authenticity. In your study, did you actually find out that simpler party manifestos are produced by highly populist actors?

Daniel Bischof: Indeed, we find that parties that emphasize the will of the people as well as anti-elitist rhetoric are more likely to simplify the language of their campaign messages. So far, this relationship has remained a stylized fact in research on populism. The classics in the literature frequently stress theoretically that such a relationship should exist, but as far as we are aware our study is the first one to empirically test if such a relationship exists. 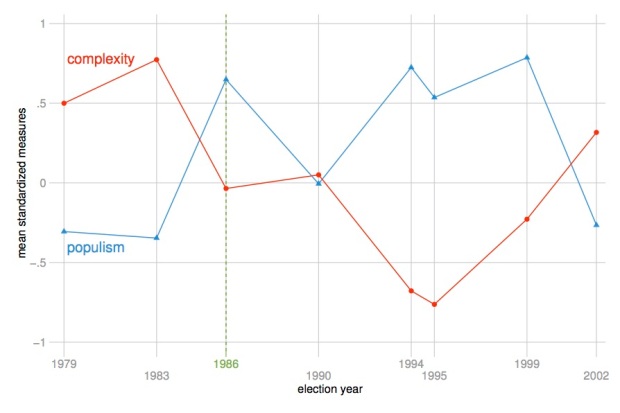 POP) You measured the complexity of party manifestos. Would you expect to find similar results also in speeches, parliamentary debates, party press, or social media?

DB: Let us take a step back and first outline how we measure simplicity. We measure simplicity with a formula that is well known and validated in educational sciences (Lix: Lesbarkeitsindex). The measure is not perfect – there is a current working paper by Benoit et al. which solves some of the major concerns in relation to the measure we employed. Thus, the question remains if such more fine-grained measures would result in similar findings.

However, we do know from previous research that parties rely on fairly similar positions and style across their communication channels. In fact, several papers presented during the last European Political Science Association conference focusing on parliamentary speeches and debates showed a similar relationships between populism and simplicity of speech.

POP) The idea that populist actors use a simple language is intuitive, but it has almost never been tested empirically. Why do you think that is the case?

DB: Correct, not only is it intuitive but as we said earlier if you look into some of the classics on populism (e.g. Mudde Populist Zeitgeist) people have thought and theorized about it for a long time by now. Why it has never been tested? We suspect that this largely relates to the fact that it is not simple to measure simplicity. First of all, very different conceptual understandings of simplicity seem to exist. I once presented our findings in Denmark. During the talk one colleague suggested that his understanding of simplicity has nothing to do with the language employed in campaign messages, but rather with the complexity of the content provided by political parties. Take Donald Trump’s policies as an example: his style of speech is simple, but also his policy content is frequently simple. His policy answer for migration: let’s build a wall. People lost their jobs: let’s cut free trade. How to stop ISIS?  Let’s bomb the hell out of them. What our measure captures is his simple style of speech. What we cannot capture is the simplicity of the content itself.

Being nice to Rocket Man hasn’t worked in 25 years, why would it work now? Clinton failed, Bush failed, and Obama failed. I won’t fail.

POP) The use of a simplistic language might also produce a further effect: voters can more easily position parties in the ideological space. Is this the case? And which consequences does this generate?

DB: We argue that this should be the case on the one hand because simpler messages are more likely to be repeated in the media. The more the media expose voters to a certain position, the more knowledge the voters should have about the very position of a party.  On the other hand, voters’ capabilities to understand party positions should heavily depend on how well parties communicate their positions. If I relied mainly on jargon, statistical termini and formal modelling in my classes my students would find it even more difficult to follow my classes. The same should be true for the masses following political campaigns. We study this aspect, and simpler messages stick with voters. Yet, the effects of simplicity are comparably small. We are currently designing a survey experiment to test this link more carefully.

The consequences you can draw from this finding are versatile and contradictory. Some of my more pessimistic colleagues would argue that in essence there are no meaningful consequences: voters do not listen to parties and campaign messages anyways. Thus, why should it matter how parties communicate to voters? To be frank: I find this perspective short-sighted.

Many voters might ignore parties and their campaigns specifically because parties use complex language and rely heavily on jargon. In our study, we find that most manifestos we study are more complex than an average article in the German newspaper “Die Zeit”, even more complex than Thomas Mann’s “Tod in Venedig”. Many political debates end-up in expert talks providing a lot of information but relying on complex figures of speech and jargon. Voters might struggle to follow some of these debates. From this perspective, I can relate to voters who feel left behind. More anecdotal evidence suggests to me that many of my friends and my family are interested in politics. Yet, between their jobs, families and other commitments they find it difficult to follow politics. As a result, they frequently ask me to explain to them what the potential consequences of a specific policy are or what in the world party X stands for. Therefore, I suspect that it will be pivotal for political parties to re-think their communication strategies not only during campaigns but also when drafting and explaining policies in the future. It is their job to communicate their ideas meaningfully and comprehensibly to voters. 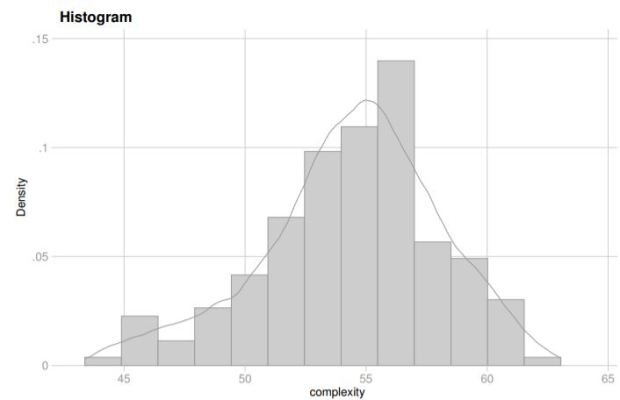 Relationship between density and complexity

POP) In the US, the use of a simple language has been considered of paramount importance for the success of Donald Trump in 2016. Do you think it is correct to assume that his simple and repetitive language constituted an advantage? And what if very simple messages eventually contradict each other?

DB: Before answering your question: I am not an expert of American politics. But when I read such allegations in the media I found the arguments and conclusions premature. I suspect that in line with our findings many voters might have found his style of speech attractive especially if compared to his competitors’ style of speech. Indirectly this might have had a very small influence on some voters and their decision process. Party identification and party polarization are so strong in the US context that in so many ways his election is less exceptional than the media want it to be.

The crowd fled at the sound of gunshots.

Imagine the deaths if the shooter had a silencer, which the NRA wants to make easier to get.

We did not study contradiction in our study. In a different paper, I find that parties rarely truly presented contradicting positions. Of course, this appears to be different for Donald Trump. My own take is that many of his voters do not support him because of his contradictions, but rather despite of the contradiction. From a political science perspective, we do not have enough studies investigating the consequences of contradiction in politics. There is some research suggesting that blurring – not having a clear position on a specific issue – could be electorally beneficial for some parties. Though not having a position is something very different than blurring one.

POP) Do you think that the media might give more space to populist actors because of their simple messages, which in turn resonate with a commercial logic based on the need to sell understandable and flamboyant political messages?

Our leaders betray us.

We have to resist. https://t.co/L2LFzkGupD

Roman Senninger: It is no secret that mass news outlets work with a rather simple language. One could therefore assume that those outlets need to spend less effort to translate the simple statements from populist politicians into their own working language. Therefore, they might be more receptive to the simple language of populists. Research shows that personalized, contested and negative news often get coverage. It would certainly be interesting to test whether simplicity plays a role here. However, this is a question that we should probably leave to communication researchers.

POP) When do parties tend to articulate a simple discourse? Only in cases they are populist, or other characteristics matter as well?

DB: In our study, we control for a set of other explanations as well. Party organization seems to be a very important factor: We find that less hierarchical organized parties are using simpler language. Activist influence might push party leaders to more carefully draft manifestos in an effort to secure their activists’ possibilities to hold the party leadership accountable after elections. Older parties appear to be more professional when drafting manifestos. Experience somehow makes manifestos more comprehensible.

POP) You also observed in detail the evolution of the manifestos of the Austrian FPÖ. What did you notice?

RS: We noticed that the complexity in the party manifestos of the FPÖ goes up and down over time. Thus, there is quite some variation over time. We looked a bit closer at the variation and saw that it is closely related to the leadership of Jörg Haider. Haider is often regarded as a prime example of a populist politician. We would therefore expect that we see a more populist and simpler style of communication under his leadership. In fact, we find that the party became more populist and communicated in a less complex way during the leadership of Haider.

POP) Did you find any simplification of the party manifestos over time? One would expect that, since populist discourses are increasingly widespread, the language of political actors should become more and more down to earth. Is that the case? Or an increasing professionalization of politics might have produced on the contrary an increasing complexity in party manifestos?

RS: We find that the simplicity of party manifestos is relatively stable over time. A general populist development that simplifies the language over time is therefore not visible in our data. It is hard to say why this is the case. Professionalization of politics might play a role here. We observe that other features of manifestos do change over time. We see for example that the number of words clearly increases. It might be the case that other measurements of simplicity are better able to capture longitudinal developments. Ken Benoit and colleagues study the complexity of State of the Union speeches with the help of the crowd and find that the probability that a speech is easier to understand than a fifth-grade text is increasing over time. In general, I would say that a more focused investigation of the changes over time is definitely something that we want to look at in the future. 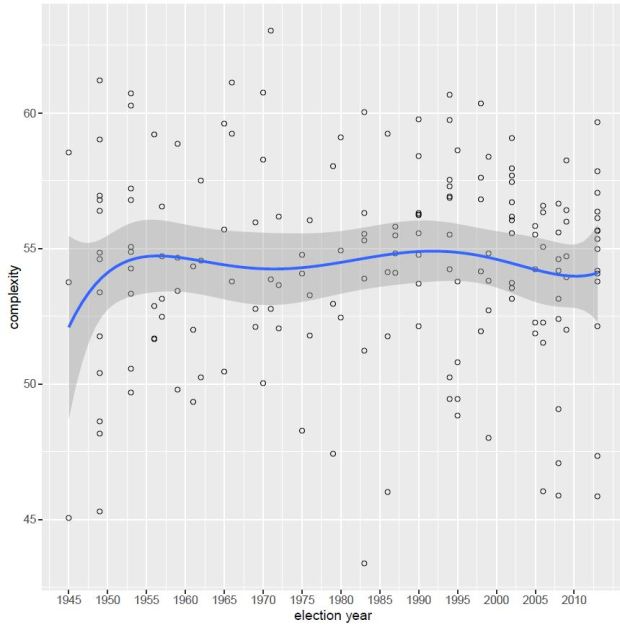 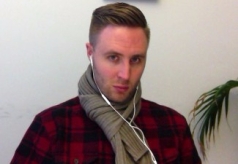 Daniel Bischof is a senior researcher at the Department of Political Science of the University of Zurich. Using a comparative perspective, his research focuses primarily on party competition, political representation, public opinion formation and revolutions. For more information please visit danbischof.com 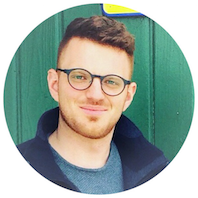 One thought on “Double interview – Speaking in layman’s terms: populism and simple language” 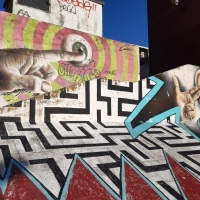 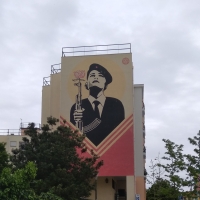 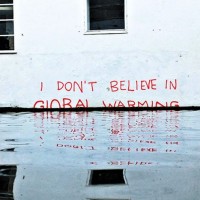 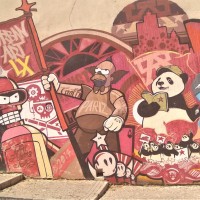 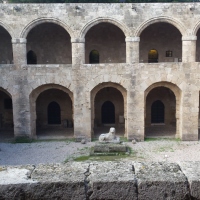 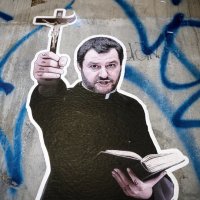 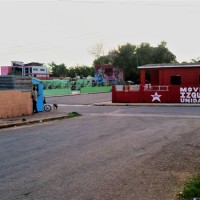